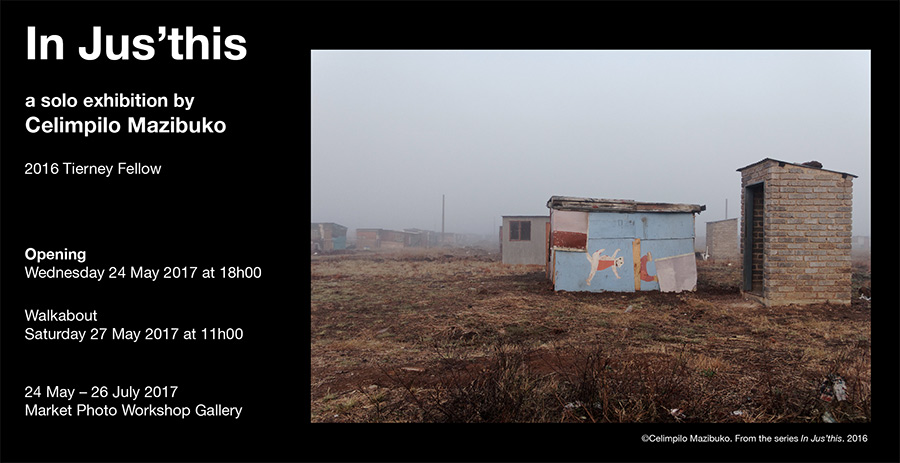 A solo exhibition by the 2016 Tierney Fellow Celimpilo Mazibuko

Join us for the opening of Celimpilo Mazibuko’s exhibition Injus’this on Wednesday 24 May 2017, 18h00 at the Market Photo Workshop Gallery

The 2016 Tierney Fellowship at the Market Photo Workshop, in partnership with the Tierney Family Foundation, was awarded to Market Photo Workshop’s alumnus Celimpilo Mazibuko. The aim of the Tierney Fellowship is to provide an emerging photographer with the opportunity to develop their career and skills through a mentorship programme, an ideal space for a photographer to develop a body of work.

In Jus’this is a photography documentary project by Celimpilo Mazibuko that confronts historic land injustice by examining human settlement in South African townships, particularly in relation to post-1994 urban planning and township development that came in to being as part of the Reconstruction and Development Programme (RDP). Mazibuko’s focus is on documenting ‘’development’’ in his community, Palm Ridge, Katlehong, through personal experiences of human settlement and spatial constraints, questioning the reach of this housing policy in the daily lives of residents 23 years later.

The Reconstruction and Development Programme (RDP) was introduced in 1994 after the first democratic elections. The fundamental implementation of this economic policy was to alleviate poverty in black communities and “previously disadvantaged” individuals by providing free infrastructure and service delivery such as low cost houses, electricity and running water. While the RDP did not last, the term is still being used to refer to low cost housing developments to present.

Mazibuko was born and raised in the informal settlement of Tsietsi, near Katlehong, on the east rand of Johannesburg. After 20 years in Tsietsi, his family was notified that there was a space identified in Palm Ridge, Katlehong for low cost housing developments for most of his community to inhabit. For Mazibuko, “RDP” houses and settlements have become new ways of breaking up communities. As with the experience of his family, moving meant relationships that had been nurtured over 20 years with neighbours came to an end. Families move into new spaces and find themselves moving in with other families with similar backgrounds but from other areas.

Mazibuko questions the notion of “space” in relation to the developmental aims of ‘RDP’ housing. In his experience ‘RDP’ allocates limited land for one family; 40 square meters containing 4 rooms: 2 bedrooms, a kitchen and a bathroom. Mazibuko argues: “Most of these families have applied for these houses since 1994 and by the time they receive the houses the family has already extended, compelling families to build shacks in the backyard space that serves as an alternative to those being troubled by the limited space provided for them. Some of the families prefer to remain in a shack and allow people to rent their property so they can earn a living out of that monthly rental fee. The aim of dismantling informal settlement reduction in the township has not been fully realised.”

In Jus’this photographically raises these complexities, which Mazibuko’s  community faces on a daily basis, speaking to how the community feels about being in a different environment. In Jus’this documents Palm Ridge at the intersection of daily life and development infrastructure, settlement and re-settlement.

Celimpilo Mazibuko was born in 1996 in Natalspruit Hospital in Katlehong and grew up in Palm Ridge, Germiston. He studied visual art in high school where his love of photography and art began. Since 2012 he has devoted all of his time to photography training and practice.

In 2012 he was awarded a photography certificate for participating in a project called Of Soul & Joy in, Thokoza, which aimed at providing the young township generation with the opportunity to tell visual stories through photography. In 2013 he was featured in a group exhibition at iThuba Art Gallery. His work was also featured in numerous group exhibitions including 2014 Addis Foto Festival, 2015 F-stop Magazine and the Turbine Art Fair in Johannesburg. Mazibuko has studied photography at Market Photo Workshop and is currently completing the Photojournalism and Documentary Photography Programme at the same institution.

Cedric Nunn was born in Nongoma, KwaZulu-Natal, in 1957. He began photographing in the early 1980s as a response to the realities of apartheid, which he believed were being ignored by the mainstream media. In more recent years, he has focused on documenting social change, particularly in rural areas. He was a member of Afrapix, the collective photo agency that documented resistance against apartheid. Nunn was one of a team of photographers who covered the 1994 elections for the Independent Electoral Commission. His work has been widely published and exhibited, both in South Africa and abroad, and he has organized and curated major photographic exhibitions for both public and private institutions. Nunn teaches and mentors local and foreign photography students and has participated in numerous cultural exchanges between South Africa and other countries.

About The Tierney Fellowship

Tracy Edser, the first recipient of The Tierney Fellowship at the Market Photo Workshop, exhibited her body of work in a solo exhibition, Amelioration. Mikhael Subotzky mentored Edser. Simangele Kalisa, the second recipient, exhibited her body of work at a Joint Tierney Exhibition at the Substation Gallery, Wits University, with fellows Monique Pelser and Ariane Questiaux. Jo Ractliffe mentored Kalisa. Thabiso Sekgala (1981-2014), the third recipient, exhibited a body of work entitled Homeland at The Photo Workshop Gallery in April 2011. Mikhael Subotzky also mentored Sekgala. Mack Magagane, the fourth recipient, exhibited his work called …in this city, a reflection of Johannesburg city by night. The exhibition opened in April 2013 at The Photo Workshop Gallery. Jo Ractliffe also mentored Mack Magagane. Lebohang Kganye, the fifth recipient, exhibited her work Ke lefa laka, a research into her family history using family photographs, testimonies from family members as well as personal narratives. Nontobeko Ntombela and Mary Sibande mentored Kganye. Sipho Gongxeka was the sixth recipient. He was mentored by the renowned South African photographer Pieter Hugo. Gongxeka’s exhibition, Skeem’ Saka, opened at The Photo Workshop Gallery in July 2014. Skeem’ Saka aims to create a dialogue with the audience on issues relating to masculinity; how men view themselves and the perception society has on the male figure. 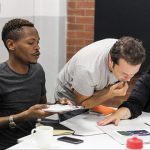 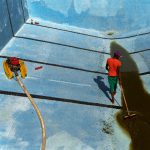 Applications open for the 2017 Tierney FellowshipNews