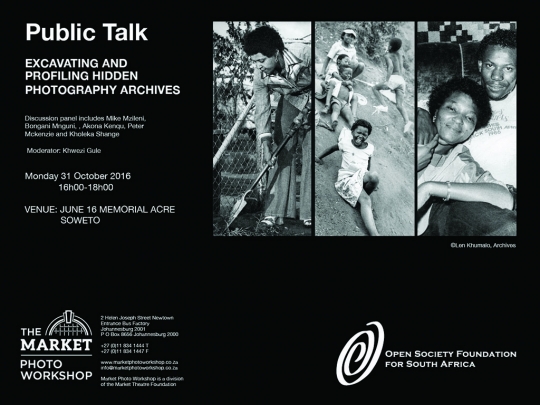 Market Photo Workshop in partnership with Soweto Museums is hosting the first of a series of Public Talks/Debates/Dialogue on excavating and profiling hidden photography archives within our township and rural communities. These discussions and dialogue forms part of a bigger plan of conserving, preserving memories and work by Veteran Photographers predominately in these communities.

The discussions aim at getting a better comprehension of the status of photography collections within Township and Rural communities, and thereafter establish urgency to intervene with the purpose of saving the national heritage resource of this country and the region.

Topics for discussions includes the following:

Excavate and profile hidden archives within our own communities and how these could possibly tell an alternative story to the master narrative of SA history and tied to that the question of how we tell our stories without always having to rely on the colonial archive. Two, how to write those archives from places of obscurity to places of prominence? How to write about archives in a way that emphasizes the particular instead of the universal and re-inscribe the ordinary into history

Khwezi Gule is a curator and writer based in Johannesburg. He is currently Chief Curator at the Soweto Museums which includes, the Hector Pieterson Memorial and Museum and the Kliptown Open Air Museum. Prior to that Gule held the position of curator: contemporary collections at the Johannesburg Art Gallery. Gule has curated a number of projects locally and internationally.

He has contributed essays to various publications including exhibition catalogues, journals and newspapers and has delivered numerous conference and seminar papers straddling his areas of interest namely: the art field and heritage studies.

Mike Mzileni started his photographic career in 1963 and has worked for various Johannesburg-based publications such as the iconic black newspaper The World, followed by stints at The Golden City Post, Drum Magazine, The Rand Daily Mail, The Sunday Expressand the Sunday Times until 1982 when he was appointed Chief photographer of the Golden City Press, now City Press. In 1987 he collaborated with journalist, Z B Molefe in a book titled “A Common Hunger to Sing”, a pictorial tribute to the woman who have made South African Music great from the fifties to 1990. In 2008 he published another book entitled All that Jazz: A Pictorial Tribute. He was featured in a World Photo Competition in The Hague Netherlands in 1966 and in 1985 he was named JPS Sports photographer of the year. His contribution to photography was acknowledged when he was appointed a judge in the 1996 and 2002 Fuji Photo Press Awards. The Drakensburg Promotions, Arts and Culture has honoured him with an award for his contribution in the Arts at the Tributes Concert Awards Ceremony for 2013.

When Bongani Mnguni took to photography in the early 1960s, he intended to photograph memories of people dressed in their best along with an array of celebrations and achievements within the community. In 1970, his work reached The World newspaper, thus began his foray into the world of news photography as a staff photographer for this local publication. The World, together with other publications and organisations was eventually banned by the government on 19 October 1977 as part of a crackdown on dissenting voices against apartheid. Mnguni’s extensive archive of negatives and photographs (both black and white and colour), bears testimony to his role as a witness, not only to South Africa’s transition from an oppressive police state to a constitutional democracy, but also as a means to reflect the daily struggles of ordinary people throughout the difficult years of apartheid, leading up to Mandela’s release, the road to the election and events in the post apartheid government. For Mnguni, scanning and reviewing photographs in his archive feels like it’s the first time he is seeing many of them. It is this very feeling that leads Mnugni to reason that photography is important in any society, freezing moments in time so that those that come later can reflect on what once was.

Akona Kenqu commenced a series of photography courses at the Market Photo Workshop in 2008 and graduated in 2010 from the Advanced Programme in Photography. In the same year a series from the body of work Tshepisong was published in the internationally acclaimed photography journal Camera Austria. Kenqu’s series Kick, Push work was included at the 2011 FNB Joburg Art Fair. In 2012 Kenqu was the recipient of the Women in Photography Mentorship through which she held her first solo exhibition, Society. She was also included in the My Joburg exhibition at La Maison Rouge in Paris as part of the France-South Africa Season in 2013. She has since worked as an archivist for Santu Mofokeng and art collector Warren Siebrits. Kenqu is currently a Photo Editor for Ogojiii Magazine.

Jabulani C. Pereira is an activist, researcher, trainer and facilitator and the co-founder and director of Iranti-Org. Jabulani lives and works in Johannesburg, South Africa. He has worked at the Legal Resources Centre, Soul City, Institute for Democracy in South Africa (IDASA), Foundation for Human Rights (FHR), South African Human Rights Commission (SAHRC), and has served on the board of the Forum for the Empowerment of Women (FEW), a national black lesbian organization, based in Johannesburg.  Jabulani graduated from New York University and has a Masters of Arts degree, with a major and focus on museum studies. His thesis titled Museum Exhibitions, Mass Violence and Human Rights, examines and tracks the ethical responsibility of museums in displaying photographs on atrocities. Jabulani worked with Alf Kumalo from 2011 until his passing in 2012.

Peter McKenzie has recently co-founded the Durban Center for Photography. The DCP hosts regular workshops, photography projects and exhibitions. He has recently exhibited on the ‘Rise and Fall of Apartheid’ at the International Center for Photography in 2013. In addition to this, he has had three shows in France during the French/South Africa seasons 2014 and was an artist and co-curator of the ‘Homing’ exhibition at the KZNSA Gallery in 2013. He has lectured at Durban University of Technology, Tshwane University of Technology, The Institute for the Advancement of Journalism and the Market Photo Workshop and has facilitated photography workshops internationally. McKenzie has exhibited extensively internationally and his writings on photography have been published widely. His present pre-occupation in Durban is the re-imaging of urban space and a study of the history of African photography.

Kholeka Shange holds a BA in Dramatic Art and an MA in Film and Television Studies from the University of the Witwatersrand. She is currently pursuing her doctoral studies in History of Art at the same institution. 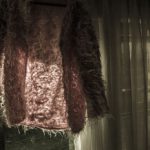 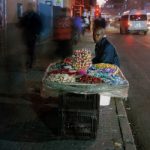