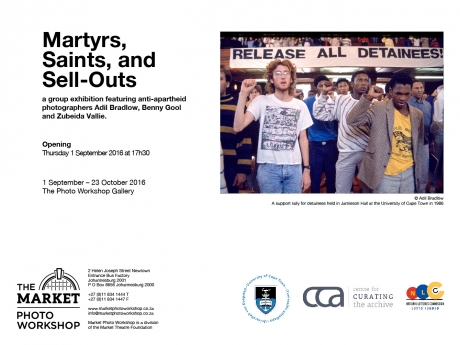 The Market Photo Workshop, a leading photography training space, in partnership with the Centre for Curating the Archive, at the University of Cape Town, present Martyrs, Saints, and Sell-Outs, a group exhibition featuring anti-apartheid photographers Adil Bradlow, Benny Gool, and Zubeida Vallie. This exhibition opens during South Africa’s Heritage Month at the Market Photo Workshop on 1 September 2016 at 17h30 and will commence with Art Week Joburg 2016.

Concept
The photographs of Adil Bradlow, Benny Gool and Zubeida Vallie are brought together for the first time in this group exhibition. From the early 1980s, these then-young photographers and friends were to be found with their cameras documenting contemporary South Africa, dodging security police, taking part in protests and being detained on several occasions. Their impressive collections show us a vivid narrative of violence, loss and injury, the reverberations of which are subdued in the rhetoric of the post-apartheid landscape.

AdiI Bradlow
AdiI Bradlow began working as a journalist in South Africa in the 1980s as a photographer covering the anti-apartheid struggle for the international news agency Associated Press.  After 13 years as a photographer, he switched to television and began working for the South African Broadcasting Corporation. He has worked for Cable News Network’s London Bureau, CBS News and television news show 60 Minutes.

As a freelancer based out of Johannesburg, he works for a variety of news companies including the British Broadcasting Corporation, Al Jazeera, Sky News and German public-service television broadcaster, Zweites Deutsches Fernsehen, both in South Africa and beyond.  Between 2011 and 2012, Bradlow was the Director of Photography on a National Geographic TV series called Battleground Afghanistan, a five part series that followed the exploits of a platoon of US Marines in the southern province of Helmand.

Through his career he has covered the war on terror worldview and has worked in hostile environments in Africa, Eastern Europe, South Asia, and the Middle East.

Adil Bradlow is the co-recipient of the CNN African Journalist of the Year Award for 2009.

Benny Gool
Benny Gool is an anti-apartheid activist whose archive contains thousands of photographs documenting the liberation struggle, freedom and democracy.  Throughout his career he has documented the injustices of a divided nation. He went on to capture the inexorable and stirring transition to democracy, the tumultuous truth and reconciliation process, and South Africa’s “homecoming” as a respected member of the global community.

Benny Gool has been a professional photographer/camera operator for about 20 years, starting at the alternative newspaper Grassroots. He then worked at the Cape Times, going on to become the chief photographer for the paper. His photographs have been published across the world, and have garnered national awards including the Fuji Press Photographer of the Year in 1996, and a commendation for the Ruth First Award for Courageous Journalism in 1997.  He is currently working as a freelance cameraman/director.

Zubeida Vallie
Zubeida Vallie started photographing in the ‘80s while studying photography at Peninsula Technikon. As a struggle photographer, her images were snapped up by local and international NGOs as well as international news agencies. Her extensive photographic collections indicate an awareness of the role that women played in the anti -apartheid struggle as well turning points in the political landscape.

One of the few women, and probably the only woman of colour, who photographed the struggle years on the Cape Flats, Zubeida Vallie’s images capture the violence of the times, but also the ‘other stuff’ beyond the headlines.  She is currently a lecturer at CPUT, in the faculty of Informatics and Design.

About the Centre for Curating Archive
The Centre for Curating the Archive is based at the Michaelis School of Fine Art, at the University of Cape Town’s Hiddingh Campus. The CCA works actively with many different kinds of collections, developing curatorship as a creative site of knowledge. Projects, publications and courses aim, through practice, to open up novel combinations of the historically separated domains of the creative arts and the truth-claiming discourses of history and the social and natural sciences. 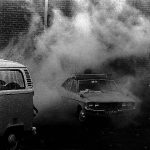 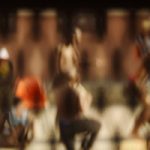