Lekgetho Makola is the Head of Market Photo Workshop 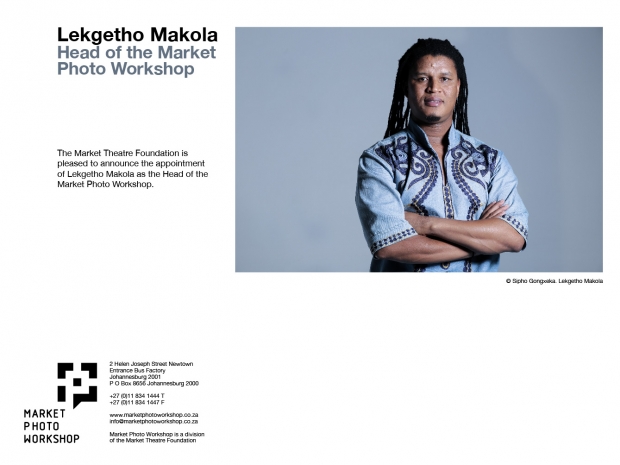 The Photo Workshop as a division of the Market Theatre Foundation is a strategic developmental institute of the visual arts and gallery. Lekgetho will have the responsibility of achieving its objectives and vision as the institution grows in South Africa and the continent through various partnerships and projects.

Lekgetho began his career 17 years ago in the arts and brings a wealth of local and international experience in his new role. He is an artist, filmmaker and gallery manager and holds a MFA from Howard University, USA. He has worked for leading art institutions such as the Durban Art Gallery, the Museum Boijmans Van Beuningen (Rotterdam), Robben Island Museum and the Market Photo Workshop as Manager for Programmes and Projects 2013-2016.

Amongst his career highlights is being commissioned to design and produce a bronze sculpture for President Mandela in 1999 and being awarded the International Ford Foundation Fellowship on Social Justice while overseeing the Mayibuye archives at the Robben Island Museum in 2009.

In its 26 years of existence, the Photo Workshop has seen thousands of students and practitioners going through its training and public programmes. And in this year, the Photo Workshop is about to embark on a very significant relocation to the new state of art photography programming facilities in Newtown, Mary Firtzgerald Square, that afford opportunities for innovative expanded programming. The opportunities include development of an Accredited National Diploma on critical photography that is inspired by the Continent and growth of the practice in the Continent. Also, realization of accreditation of the current two year – long courses.

In 2016 the Market Photo Workshop will be investing in alumni development and by creating platforms for further engagement for past students and practitioners by growing the public programmes and exhibitions.

“Now is the opportune and appropriate moment to begin the process of inviting the Alumni back to the Photo Workshop to see how these collaborations and partnerships can be fostered with a common vision of developing the photography disciple (intellectually), practice and industry in Africa.”
These programmes should enhance the growth of the industry by supporting the development of local economies within which Photographers are able to operate and practice as sustainable business professionals.

Lekgetho Makola was born in 1974 in Schoonoord at Ga-Sekhukhune in Limpopo. He attended boarding school in Jane Furse (St Marks Comprehensive College) and matriculated in 1991. He moved to Durban 1992 for his tertiary studies and in 1995 he enrolled at Natal Technikon to study a BTech Degree Fine Arts.

He worked at the Durban Art Gallery as an Exhibitions Officer/Technician 1999-2004. During this period some of his notable experiences include winning a commission to design and produce a bronze sculpture for President Mandela in 1999, being part of a movement called Red Eye Art in Durban 1999 – 2004 that changed the whole perspective of Visual Art Museums and their role in society.

Lekgetho was then invited to Rotterdam on a cultural exchange programme to conceptualise and develop a diaspora focused public programme for Yinka Shonibare’s first ever Solo show at Museum Boijmans Van Boeningen in 2003 (first solo show by non-European ever at the museum) and appointed Exhibitions and Interpretation development Manager at the Robben Island Museum 2004 – 2009.
He worked as an Acting Senior Manager for a period of year at the Robben Island World Heritage site 2009-2010. His main responsibilities were the strategic management of the heritage resources of the World Heritage Site which included development of Exhibitions and or Interpretative public programmes, research and documentation of both tangible and intangible cultural heritage of this Island, and one of the great experience was overseeing the Mayibuye Archives space which has some of the most compelling photography archive on the history of the Apartheid South Africa.

During this period, Makola was awarded the International Ford Foundation Fellowship on Social Justice for Postgraduate studies anywhere in the world. His interest has always been on how culture/language and construction of images are related, and within that how do we generate content that is relevant in the context of Africa. He enrolled for an MFA in Film Studies at Howard University 2010-2013.

Some of his achievements as a student while here include receiving two Honourable Mentions at the Annual Paul Robeson Student Films Award 2011. During this period 2012-2013, he co-founded an online independent TV, Kali TV based in Washington D.C, that focused on connecting Africans in the Diaspora (US and South America) as well as the Continent and though no longer a part of it, believes it is still doing great work. Lekgetho is part of the founding team of Parallel Film Collective, a DC based collective dedicated to promoting global images that transcend limiting racial, cultural and gender identities found in mainstream media.  On completion of his Post Grad programme Lekgetho returned home to join the Market Photo Workshop as its Manager for Programmes and Projects 2013-2016. 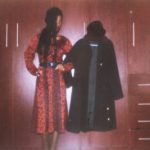 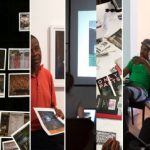