Farewell to John Fleetwood as Head of the Market Photo Workshop 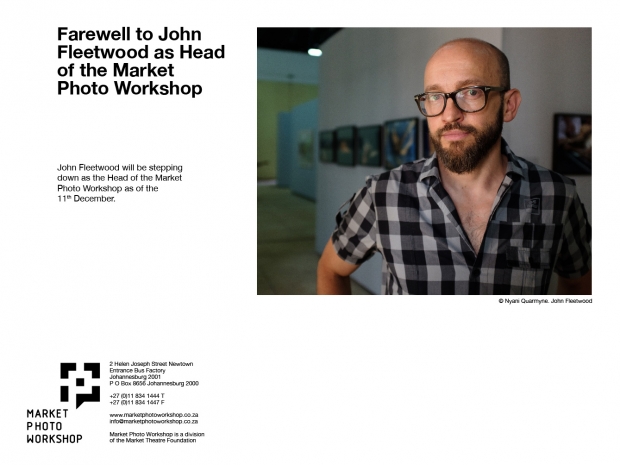 Over his 14 year tenure, Fleetwood has guided both the educational and artistic frameworks of the Photo Workshop. He oversaw the restructuring of the courses of the Photo Workshop to it current form as short fulltime non-formal, contextually driven curriculum serving 130 students annually including the Photojournalism Documentary Photography Programme, the sole photojournalism training programme of its kind on the African continent, now running its 10th cycle.

He initiated The Photo Workshop Gallery, one of a few galleries dedicated to photography in South Africa and the Continent that subsequently has shown more than 50 photography exhibitions.

The mentorship programmes brought many new emerging photographers to the front, The Tierney Fellowship now running in its 8th cycle. Through Public Programmes and Projects he has engaged the Photo Workshop with local and international audiences, marking a critical position for photography from South Africa.

The school has produced exceptional alumni such as Zanele Muholi, Lolo Veleko, Musa Nxumalo, Thabiso Sekgala many professionals in the field of image-making, photojournalism and continues to build on their unique approach to training photographers.

Fleetwood’s contribution to the development of photography within the South African public in particular is creating a platform for young emerging photographers to have a platform to showcase their work and enhance the engagement with the imagery and its context.

John Fleetwood is the outgoing Head of the Market Photo Workshop. He has worked as an independent photography curator, producer, mentor and trainer.

He recently co-curated Against Time, The Tierney Fellowship in South Africa for the 10th Edition of the Bamako Encounters. In 2014 he co-commissioned and curated A Return to Elsewhere, a collaborative photography project on communities and disconnect, between Kalpesh Lathigra (UK) and Thabiso Sekgala (SA) for the Brighton Photo Biennale 2014 and the Joburg Photo Umbrella. He is the co-curator of Transition – a collaboration between South African and French photographers about South African land and landscape (Johannesburg, 2012 & Rencontres d’Arles, 2013). He is the curator of Photoquai 2013: Africa (Paris, 2013).

He is nominator for the Joop Swart Masterclass, judge for POPCAP and recently a judge in the Tokyo International Photography Competition, Gabriele Basilico Prize and the Thami Mnyele Awards.

Fleetwood completed his Beginners Course at the Photo Workshop in 1992 and started to work as trainer in 1997. In 2002 he became the Head of the Market Photo Workshop. Fleetwood is currently a student in Visual History at the Centre for Humanities Research of the University of the Western Cape.

Fleetwood’s interests in photography are predominantly in the developing mode of documentary photography and in particular the possibilities for photography in the politics of aesthetics and representation.