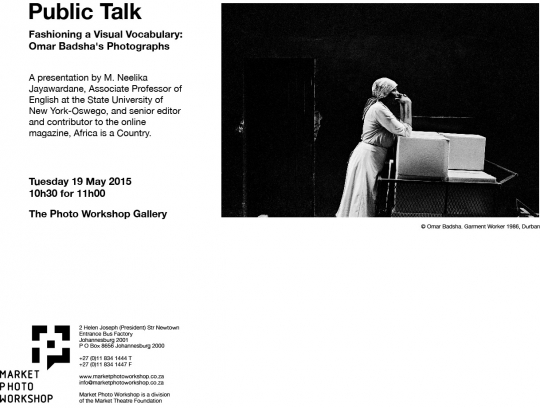 Presentation by M. Neelika Jayawardane, Associate Professor of English at the State University of New York-Oswego, and senior editor and contributor to the online magazine, Africa is a Country.

Please RSVP by Friday 15 May, 12h00 at biancam@marketphotoworkshop.co.za

Omar Badsha’s photographs are known for having fashioned a new visual vocabulary for translating the lives of those that apartheid excluded out of South Africa’s consciousness; often, the public whom he photographed may not have even realised that they were excised into the periphery of the nation’s vision of itself, nor have had the luxury of imagining themselves as part of the national narrative. Together with his passion for organising and union work, he helped make photography a strategy of intervention in how the South African struggle against apartheid was seen buy the global public. Badsha’s positions and steadfastness to the mission to which he committed himself as a photographer cost him in certain ways, but this willful desire – to record and be witness to subsumed histories, to walk in with his unapologetically political lens – also maintained his integrity as a narrator of South African history.

M. Neelika Jayawardane (neelika.jayawardane@oswego.edu) is Associate Professor of English at the State University of New York-Oswego, and senior editor and contributor to the online magazine, Africa is a Country. She is an Honorary Research Associate at the Centre for Indian Studies in Africa (CISA), University of Witwatersrand (South Africa). Jayawardane was born in Sri Lanka, grew up in the Copperbelt Province in Zambia, and completed her university education in the US. Her academic publications focus on the nexus between South African literature, photography, and the transnational/transhistorical implications of colonialism and apartheid on the body. She publishes regularly on photography and art. 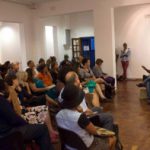 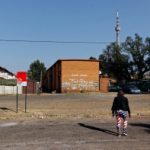