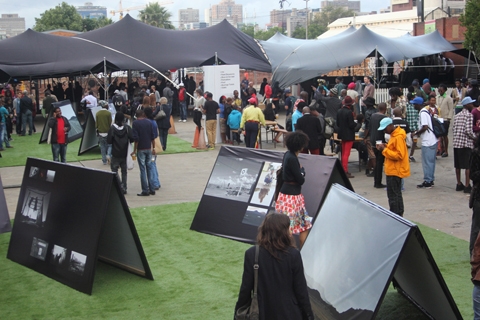 The opening of the Social Landscape Project: Transition, The Land Resource Centre and Show Us Our Land

In this, the 100th year since the historic 1913 Land Act, The Social Landscape project is currently running at the Bus Factory and The Photo Workshop Gallery until 15 March. At the Bus Factory is the collaborative exhibition Transition, a photography exhibition of works by leading South African and French photographers on land and landscape in South Africa. The Photo Workshop Gallery features the Land Resource Centre, an interactive space presenting a web interface exploring the history of land and landscape imagery in South Africa, a collection of books from the Photo Workshop library as well as a text based response by artist Nolan Dennis. The large format exhibition, featuring photographs submitted by people from around the country of their perspectives of land and belonging, will travel to various sites in South Africa in February and March this year.

The Market Photo Workshop is collaborating with Les Rencontres d’Arles for the France – South Africa Seasons 2012 & 2013. Under the curation and auspices of internationally recognised Director of Les Rencontres d’Arles François Hébel with Head of the Market Photo Workshop John Fleetwood, The Social Landscape project investigates ideas around land and the role that photography continues to play in the representation and re-imagining of land.

The project cites the work of 6 prominent South African photographers (Santu Mofokeng, Zanele Muholi, Pieter Hugo, Jo Ractliffe, Cedric Nunn and Thabiso Sekgala) who have worked alongside 6 acclaimed French photographers (Patrick Tourneboeuf, Raphaël Dallaporta, Alain Willaume, Thibaut Cuisset, Philippe Chancel and Harry Gruyaert (Belgian resident in France)) to develop separate bodies of work that will speak to a land experience unique to various sites in and around South Africa.
The project is an engagement with South African land and the people who live on it. It questions socio-political contexts and engages photographically with various held, socio-historical and disseminated ideas around land. The process of the project itself has shed much light on popular held views on landscape, charting questions of belonging and viability of place for all. Through the trips each photographer took to certain locations in South Africa and the invitation to the public to submit their own photographs of their own land, land is re- introduced into public discourse not only in its historic capacity but also in the moment of photography itself.

Social Landscape: Show Us Our Land
Show Us Or Land is the result of the nation wide call for South Africans to create their own images of land and landscape. This project was run through social media and many of the images were sent by cellphone. The project has coverage from all 9 provinces and over 1000 images were submitted.
They were on exhibition out-doors in large A-frame boards spread across Newtown Park leading toward the main exhibition space for the Social Landscape Project. The A-frames also speak to a large format projection of the images and a publication.

The Show Us Our Land Exhibition has travelled to three provinces over the month of March 2013. 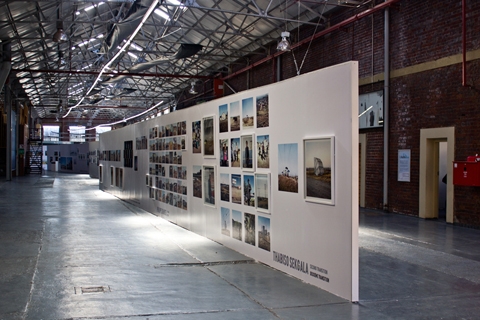 Morning Schools Programme
A training programme was held with school learners from Buhle-Buzile High School from Thokoza in Ekuruleni and selected community members from Rustenburg, on photography and landscape.

Panel Discussions
A series of panel discussions relating to issues on land took place on issues relating to land and photography such as art, politics, gender and education.

Show Us Our Land
An outdoor exhibition, that featured images generated by the public in response to the idea of a social landscape. This culminated to an evening screening of over the over 1000 images submitted by the public.

©Tebogo Moche, one of the prize winners of the Show Us Our Land project 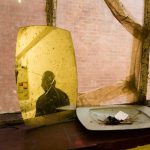 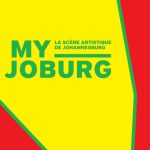