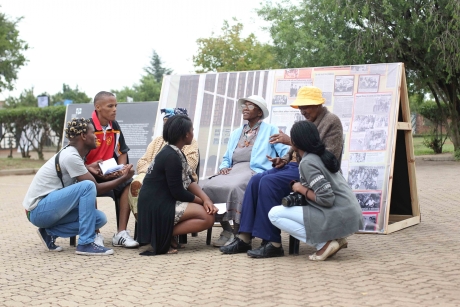 The Makweteng project was a project that focused on heritage and living conditions in Makweteng, a historical township in Tlokwe in the North West Province of South Africa. Makweteng reflects the complex history of South Africa through its “pre-colonial period”, as an example of a colonial heartland in the development of Afrikaner nationalism, right through to being the first site of forced removals and its current cultural differentiation, with many foreign nationals inhabiting it. It also reflects the transitions and movements of the country in smaller towns, where cultures are often exaggerated and polarised.

Over the past nine years the Photo Workshop has initiated and facilitated projects in the Tlokwe area of the North West Province, which have acted as precursors to the current Makweteng Project. These projects focus on different, particular issues, which allow sustained engagement with communities whilst becoming involved in the various facets of their social living.

The overall Makweteng Heritage Project was made up of four smaller projects:

The project aimed to reconstruct and conserve significant heritage resources in Makweteng, to share their values with the South African people, and contribute heritage information and perspectives through photography.  In so doing, the project ensured that:

•    Future generations have an opportunity to discover their past, their experiences, community life and identity through their documented heritage and history
•    The visual arts and photography market is supported

This course introduced audio media as part and parcel of narrative research methodologies such as participatory observation and oral history, as well as its related online communication infrastructure in the “information age”. It explored integration of audio media into professional photographic practice not only as an additional bonus of multimedia capacity, but a creative listening tool to continuously reassess and develop one’s own visual production and procedures.

An Introduction to Visual Anthropology, facilitated by Juan Orrantia
16-23 March 2011

The intention of this workshop was to create considerations of inter-generational dialogue. As generational rifts grow, and have always been terse in South Africa – at least since 1976 – and conservative rhetoric around history belonging to the past and the youth being disengaged in their heritage becomes dogma, this workshop provided generations the opportunity to share their interests, communicate their perspectives and appreciate the viewpoints of opposite sides of the age spectrum.  The workshop was developed as a way of assisting photographers in meeting and communicating with the initial residents of Makweteng. It gave the photographers the opportunity to hear directly from those who experienced it, what Makweteng was like and what the forced removals were like. Further, it gave them some indication of how those who experienced it make sense of it and in what ways they have come to imagine its consequences, realities and historical importance.

Since April 2011 photographers made independent visits to Tlokwe whilst conceptualising their projects and photographing extensively.

However, in June 2011 a week-long workshop was held to intensify the process. All the photographers were able to photograph each day, and workshop their concepts together each evening. This gave the photographers the opportunity to share some of their findings and speak about their work. It also afforded them the chance to share their challenges and receive, as well as give, suggestions. Many of these challenges included community buy-in, access and project construction.

For more information on the Makweteng Heritage Project, click here. 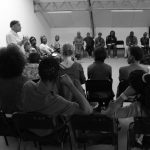 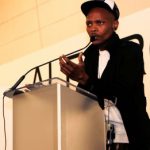