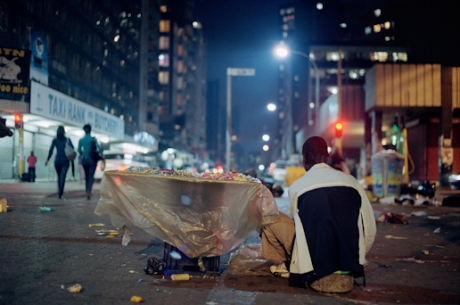 Thandile Zwelibanzi’s Still Existence is a series that looks at the presence of informal traders on the streets of Johannesburg, in particular around one of the biggest taxi rank-cum-markets in the country. Zwelibanzi’s series begins with those trading at night, a significantly unsafe and quite isolated time for business on the streets of Johannesburg. Many of these traders have migrated from various parts of the continent and other parts of South Africa to the big city to make a living out of selling fruit, vegetables, sweets, or cigarettes. Zwelibanzi captures the individuals who stand on street corners for hours at a time, and documents their makeshift stalls and easily transportable goods. Although they are present day after day for up to 15 hours at a time, they leave little behind once packed up; and are prepared to disappear easily should the police arrive and begin one of their regular raids on “illegal” traders.

These traders’ presence on the streets of Johannesburg is a definite claim of belonging, of ownership of space, however temporal and legally blurry. Their presence and the community they develop with other traders, local taxi officials, and the customers who buy from them regularly, create a specific network that spreads throughout the continent through trade lines and remittance flows. Zwelibanzi’s exhibition explores the ways in which individuals play their part in this mass migration, and how they maintain their social relationships, engage their historical ties, and renegotiate their spatial belonging.

Artist’s statement:  Before I came to Jozi (when I was around seven years old) almost everyone I knew in the township talked positively about this city, it was referred to as “Jozi maboneng” in Sotho, which simply translates to “Johannesburg in the lights”. The only time that I viewed the city was at night on our way from Eastern Cape with my parents, as the bus would pass near Jozi going to my township, Kagiso. What used to be very interesting for me were the Jozi lights, its view would be very glamorous, seeing it from a bus window. When I did eventually enter into the city and the taxi dropped us in front of Noord Street taxi rank, the city looked completely different from what I used to view from a bus window. The sun was hot and people were all over the show, everything seemed crazy. I soon learned that in the 1980s, the move of the financial district and the middle and upper classes out of the city centre, due to increasing levels of crime and movement of black people into the Jozi cityscape, meant that the city became a “no-go” area for wealthier people, but did allow for many small black business opportunities and African migrants to set up shops and a large informal sector.

What became intriguing for me again was seeing adults selling sweets to other adults and the way their trading stands were designed was very different from what I used to see in the township. The space was used differently and there were attempts to make it appealing, as most stands were on the pavements. A local architect and council official, Li Pernigger, says pavements are now like sites “but they are sites like no sites you’ve ever seen” they are different in shapes, some are thin, long, wide and some are not paved at all. Informal traders were almost in each and every corner of the town with their trading stands selling sweets, cigarettes and other small objects. I became curious and concerned on how the informal traders use the space and also how the hell they earn their living through profit from selling sweets, cigarettes and other small objects? It seemed unreal.  These traders were always in their space of business almost at all times, from the morning when the taxi dropped me from home until at night when it took me back to my place of belonging.

This triggered something about my childhood expectations about the city (many of which I came to no longer trust) and I began to make small conversations with them and began a photography project in 2009. It looked at the effort that they put into their business to sustain their lives, paradoxically by sitting still at their trading stalls.  I wanted to know their role in our African landscape and to the constantly changing Jozi landscape, informal sector and what made them choose Jozi. With their temporary structures (plastic crates, cardboard boxes, ironing boards, etc.) they have redefined the space. Hanna le Roux says: “What is being constructed in this reconstruction is not a new space but a new encounter with space, in time.” Some start personalising the space, making “land claims”, placing ownership on the land. The Johannesburg CBD sidewalks have new social and recreational functions.

There are approximately 4 000 street traders in the inner city of Johannesburg. Actually, there could be more than these. Informal trade is as old as the informal economy. It is the main source of job creation in Africa, providing between 20 and 75 percent of total employment in most countries.   But I am interested in the daily existence of these traders, of their place, their time and their self-produced existence. I do this through portraits, street views, and investigations into their stalls. But most specifically I often do this at night. At night, that’s when the city is taking a breather, its life is getting settled. Everything becomes different, the environment, atmosphere and city’s feel and mode becomes completely different from daytime. It all came back from what I used to view when I was a kid on a bus window.  Ref: Kate Tissington (2009). The Business of Survival: Informal Traders in Inner City Johannesburg.

Thandile Zwelibanzi was born in Willowvale, Eastern Cape in 1987. He grew up and went to school in Kagiso in Gauteng, where he still lives. Zwelibanzi completed a Foundation Course in photography at the Market Photo Workshop in 2008 and an Intermediate Course in 2009. In 2010, he was awarded a residency at the International Summer Academy of Fine Arts, for two weeks, in Salzburg, Austria. Also in 2010, he became the sixth recipient of the Edward Ruiz Mentorship at the Market Photo Workshop. He has participated in a number of group shows, including In Transit(Johannesburg 2008), Diversity (GTZ) (Berlin 2010 and Pretoria 2011) and Dialogue South Africa-Austria (Johannesburg 2010). In 2010, the body of work Still Existence was published in Camera Austria International No.110. 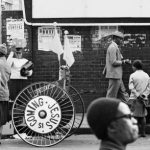 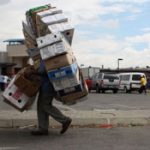