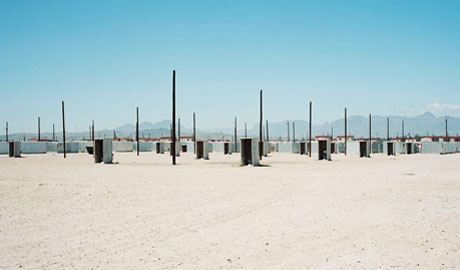 IN/OUT is a photography exhibition by Laurence Bonvin.

The Photo Workshop Gallery, with support from Pro Helvetia, the City of Geneva Art Council (FMAC) and the National Arts Council of South Africa, presents a travelling exhibition of photography by the Swiss artist Laurence Bonvin, whose two series explore landscapes on the margins of Cape Town and Johannesburg. The exhibition will open at 18h00 on 9 February 2011 and closes on 16 March 2011. There will be a walkabout with the artist on 16 February at 13h00, which is open to the public.

Bonvin will showcase two series of photographs focused on peripheral urban spaces, which she produced whilst in residency in Johannesburg and Cape Town in 2009. Her work is concerned with urban landscapes and asks questions about the functionalist architecture of South African cities, and how it affects those who live there. A version of this exhibition was shown at Blank Projects in Cape Town in November 2010.

Bonvin, who is based in Geneva and Berlin, studied photography at École Nationale de la Photographie in Arles, France. She is the author of four publications, and her work has been exhibited in London, Paris and Zurich, among other European cities, since 1993. Her work is concerned with urban landscapes, and asks questions about the functionalist architecture of cities and how it affects the perceptions of those who live there.

Blikkiesdorp is the title of the second series, named for the newly-built township close to Delft South on the edges of Cape Town International Airport. There Bonvin captured in striking detail through architecture, everyday life scenes and portraits, the living environment of these “transit homes”. The result is a portrait of brutal social reality.

With In & Out, Bonvin explored the margins of Johannesburg and produced a series of landscapes that reveal the fragmentation and complexity of a multi-faceted peri-urban fabric. It finds on the margins of the city different spaces that are at the same time undergoing deep transformations, yet still marked by the strict divisions imposed by apartheid.

Accompanying these two series will be a selection of works by Akona Kenqu, Mack Magagane, Mamaki Rakotsoana and Pako Magabane, all alumni of the Market Photo Workshop, who produced these works with Bonvin while she was their trainer in the Advanced Programme course in 2009. The selection from these different bodies of work is largely influenced by similar issues to those of Bonvin, looking particularly at urban and peri-urban landscapes and the nuances of human occupation in these peripheral spaces.

The title of the exhibition, IN/OUT, relates to the question of the frame, to inclusion and exclusion as well as to the artists’ position as observers and simultaneously as members of society, thus investigating the boundaries between observation and participation. 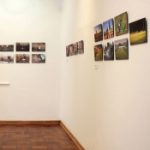